I like you here.  You are very special  and calm.

These were the words from on of my new Tia's, Olga, on a day I needed it the most.

Niomi, Me, and Olga 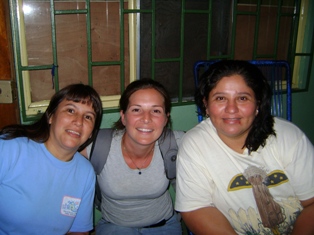 ~They are truly angels~

Three Weeks ago I was moved to what they call the "upstairs" house. There are a total of three houses at Hogar De Vida.  They are referred to as the "upstairs", "downstairs", and "lower" houses. Originally I was in the "lower."

I was sad to leave the other house but was excited for the new experience...and boy is it an experience.  There are a total of 12 children in the house, 11 girls and 1 boy.  They are all under the age of 7 and 8 of them are still wearing diapers during some time during the day.

With 12 kids there is a ton of Laundry.  Everything is washed daily and is lined dry.  It is a lot of work but a priceless experience.  The view is beautiful and the most of the time is spent in thought….unless of course you have a helper! 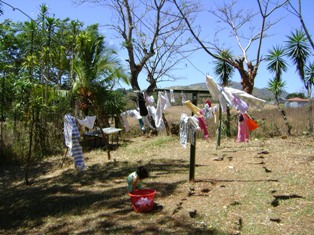 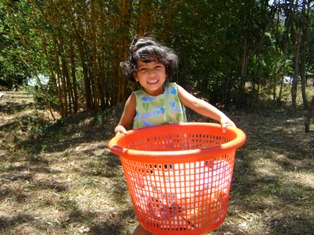 Other than that the rest of day is spent cleaning, doing dishes, diapers, changing clothes, washing hands, and most importantly playing.

This is where they keep their shoes are kept....and the famous game of hopscotch that kept them occupied for hours. 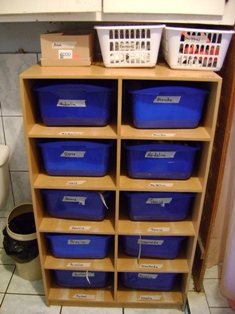 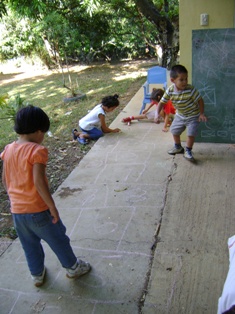 The picture on the far left is of Pricilla and Angela getting home from school.  Each child in Costa Rica is required to wear a uniform to school.  If you don’t have a uniform you don’t go to school.  School is of course free but uniforms are not.  In the workforce the standard hourly wage is around 750 Colones, which averages out to a little over a dollar an hour.  It ultimately depends on the occupation, but it is still not much.  Uniforms alone are around 3,000 Colones or six dollars each and this does not include the list of supplies and books the school requires each child to have.  If you have numerous children, well you do the math.  It is a harsh reality and a shame that some kids will not get an education simply because they cannot afford a uniform.

Fortunately all the children at Hogar De Vida can go to school.  With the help of sponsors and government funding they are able to afford the uniforms as well as the books and supplies.

…and  no I did not ask Nidalyn to put the balls in her shirt…but when she did it on her own it was a picture I couldn’t resist!

Every door has a hole cut out of it so we can check on the kids without having to open the door...isn't this the cutest picture!  The next picture is on the trampoline and this is one of their favorite things to do. 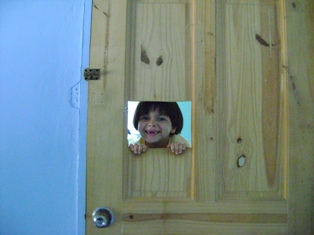 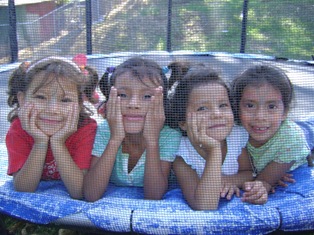 Isn't this an awesome idea!  I thought it was so neat! 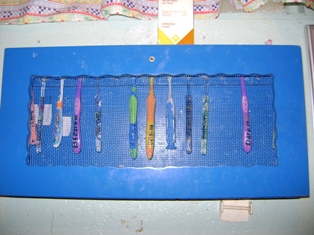 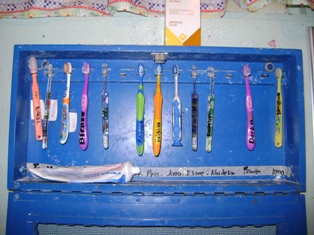 This week is my last week in Atenas.  I was given the opportunity to spend it at the orphanage and I have graciously accepted.  It will be total submersion.  Because the orphanage is located on the outskirts of town I will not leave Hogar de Vida until Friday.  I am a little nervous simply because isolation has never been my strong point, but I think it will be a great opportunity to strengthen my relationships with the children and the Tia’s as well as allow a lot of "me" time...a chance for reflection and growth.  I will get first hand experience on how a house with 12 little ones is run from sun up to sun down.

The bonds I have formed with the children will never be forgotten.  It is an unexplainable feeling to have a little one crawl in your lap just because or be greeted with such enthusiasm each time you enter a room.  There is no limit to love when it comes to a child and the absorption rate is unfathomable. I am very grateful for the time I have spent at the orphanage and I will miss the beautiful children of Hogar De Vida and the Tia’s dearly. 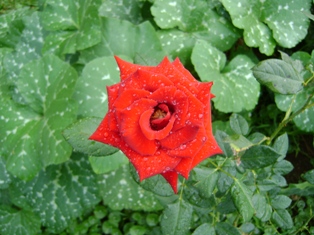 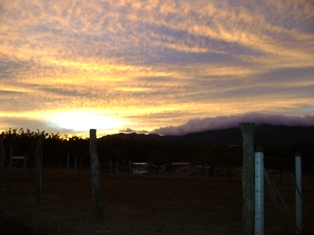