Hola Amigos!  I am so glad to finally get a chance to talk to you!  Unfortunately my computer died on me two days after I got here.  I just got it back yesterday and have so much to share....so lets get started!

I arrived in Atenas on the 1st of February.  The first 24 hours were very nerve racking.  Not only did I not know any Spanish, my host family did not know any English.  It was just me and my dictionary...lol...and every sentence took at least 10 excruciating minutes to get through.  Thank God for the Spanish lessons!  Two weeks later I am happy to say that the dictionary is kept safely in my backpack 90% of the time.  I am learning fast and love it!  It is a joke around here that I speak Spanglish...but what ever works right?

I live in a small town called Atenas.  It is beautiful.  Like most towns in Costa Rica it is centered around three specific structures...a church, school, and soccer field. The church is beautiful and muy grande!  The second day we were here we saw people getting bused in on a school bus.  I often walk by and hear them singing and I must say that I hope to attend at least one service with my host mom before I leave. 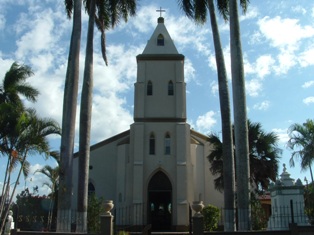 The main park is centered right across from the church.  It has five main entrances, one on each corner and two down the middle.  The walkways are all lined with numerous benches and they all lead to common area in the center of the park.  There are huge palm trees all in and around it and lots of people all the time. 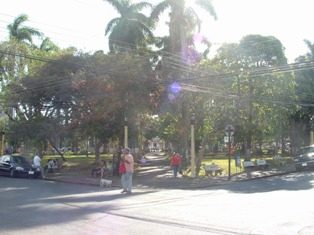 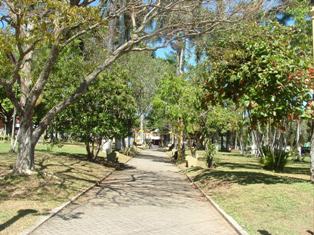 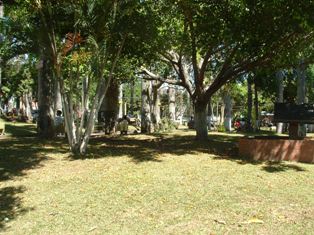 There is another park or soccer field up the street.  It also has a volleyball and basketball court, and a lot of kids skate board there. Friday morning there is also a market there. 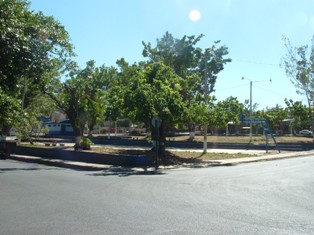 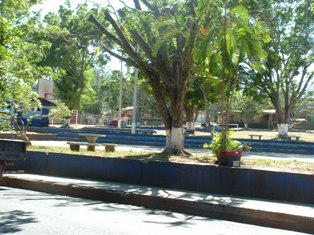 The elementary school is located to the left of this park.  The kids just went back to school yesterday from their summer vacation.  The seasons here are backwards from the states.  In Costa Rica there are two seasons refereed to as the rainy and dry seasons.  Right now it is 80 degrees and is considered the dry season and from May to November it will be the rainy season.   I have never been in Costa Rica during the rainy season, but hopefully I will get to experience a little a dose of it at the end of my trip. 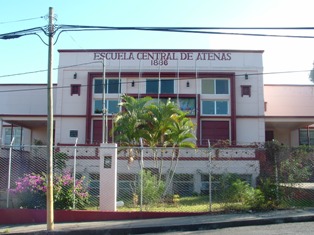 Other than that the town is pretty small.  There is a lot of shopping, a couple of grocery stores, restaurants, and a market, which is pretty neat.  The whole town probably consists of 4 main streets running each direction.

The Market is a major culture shock.  There are people EVERYWHERE selling EVERYTHING.  The Second day we were here we went there and bought some avacado and some fruit.  I bought a whole watermelon and the vendor cut it for us so we could eat it right there.  Everything is super cheap.  There is also a local bus stop so it brings in all kinds of people!

The bank in Atenas in very interesting.  It is kind of like the DMV in the states...there are two rows of chairs and everyone just moves down as people are called to the window.  They also have a baby and old folks line where they get to skip the rest of us.  The first time I went to the bank it took me at least an hour to circulate through the chairs to exchange my American money.  Now I just use the ATM's but even those lines are out the door.  The exchange rate here is 560 Colones for every $1.00...It is actually really interesting to learn about how money is exchanged throughout the world...never really thought about in until now.  It has really been an awesome learning experience.  For the most part people hear are pretty honest.  I still get confused and ask them to show me on a calculator.  I am constantly referring to 1000 Colones as 1000 dollars and sounds pretty funny when you don't realize you are doing it...lol!  There is only one gas station and believe it or not looks pretty much like a gas station.  The super markets are also pretty standard.  They have just about everything and priced pretty close to the states.  As for the convenient stores there pretty much just a hole in the wall. Right now I am sitting at an internet cafe called CafeTico.  It is very peaceful and almost jungle looking.  In the back is a butterfly garden with all kinds of exotic plants and butterflies.

The interesting thing about Atenas is that there are no street signs or names.  Addresses are literally in front of the gas station or 1 block from the supermarket in front of the third restaurant....lol....amazing isn't it!

Please feel free to send anything....and we will hope that it gets here!

Please visit the next page to see mi casa, amigos, and Su Espacio